As a long standing XCOM and strategy gamer for going over a decade and the idea of a portable way to get that strategy fix is too good to be true….And then somehow Rabbids was the answer.

This crossover video game was developed and published by UBISOFT, collaboration with Nintendo’s Shigeru Miyamoto. Released on 29th August 2017.

Now I’ve never been a fan of the rabbids, I played ‘Raving Rabbids’ on Nintendo DS and found them rather annoying thought they were primarily aiming for a much younger audience, which is fine, but those games would mostly populate the party game space.

So when the announcement at UBISOFT’s E3 2017 press conference was for a new game for the switch involving rabbids I sighed and rolled my eyes at the prospect with bad memories of the Nintendo’s Wii’s endless wave of shuffle ware and party games. But like a lot of people watching the conference I was so surprised about what we got. The rabbids and Mario characters in a new strategy game with similar play to the XCOM series? Fantastic! If not original, but still exciting. 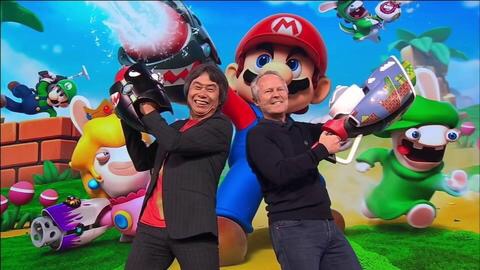 Now we have it our hands how does it hold up. This is turn based tactical game using movement system most comparable to XCOM and its own grid based movement. It uses a chance-to-hit mechanic depending on the position of characters, for example if the character is behind cover, just like XCOM, but only uses 0%, 50% and 100% chances of a hit.  Your squad will comprise of 3 characters from a variety of characters from Mario, Peach and Yoshi to their rabbid counterparts rabbid Mario and the psychotic as hell rabbid peach. Each character has a variety of weapons and abilities which impressively have a lot of depth with the movement system as well as what they can actually do with them. Now a lot of people, including myself, will give this game the identity of XCOM with a Mario and rabbid paint job. To an extent I have to agree but in terms of what the fun factor is in this game it’s an absolutely fantastic experience and was pleasantly surprised and so happy I was wrong of its first impressions at E3. A variety of new movement mechanics such as the jump off your other squad member, which in of itself presents funny animations, but also allows for a way to extend character movement to cover greater distances. Making movement much more dynamic and interesting for different ways of taking on your enemies. Overall in terms of the new mechanics meshed with inspiration of previous turn based tactical games the gameplay becomes very apparent with its amount of depth. Easy to learn but can be hard to master is you want to score perfect on a lot of the worlds.

So the story begins starting in the human world, a teenage inventor who is obviously a massive Nintendo fan with lots of Mario paraphernalia in her room, she is humming away and comes up with the creation of the “Supermerge” (VR goggles) which combines two different objects together, unfortunately her invention overheats again so she storms off and leaves her floating robot beep-o behind (who also allows the player to direct movement in the over world before battle). Suddenly the rabbids randomly appear in the inventor’s room in a time travelling washing machine and messing around causing complete chaos. One of the rabbids puts on the “Supermerge” and turns the rabbids into Mario characters, the travelling washing machine absorbs of all the rabbids and beep-o and it teleports them to the mushroom kingdom where everything is combined and the rabbids continue causing the chaos. Rabbid peach and rabbid Luigi team up with Mario to find the rabbid wearing the “Supermerge” to save the mushroom kingdom.

In this strategy game it is important to plan every step of your movement, take cover and attacking using their abilities which each character will have different abilities, it is up to you to choose what abilities each of your characters have by the skill tree. You can choose from a wide range of weapons to upgrade using the coins you collect throughout the map. These weapons will help in different ways such as honey can make the enemies stuck for a turn, bounce will make the enemy go flying in the air, ink will stop an enemies attack it’s all down to you to choose these weapons and attacks depending on how you want your team to play. Some weapons can harm your team mates if you are close to them when attacking so you need to be careful. You have 3 members in your team and you can unlock new characters. You can also jump on the enemies which will harm them, during your movement phase and then you use your weapons or you can do vice versa. So there is choice in terms of playing with a lot of strategy when engaging a variety of enemies and boss battles.

I haven’t had any technical difficulties with the game so far. It is great to play on the go at 720p 30fps or docked playing at 900p 30fps. So it runs very well, plays great and looks great. 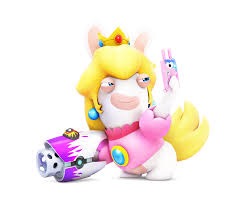 In the end this game is extremely fun and quirky in owns right.  Rabbid peach is my favourite because she is just so sassy and well as borderline psychotic. The tutorial is very well crafted and can be learnt very quickly as it instructs all of the basic mechanics you need as well as how you can combine a lot of these mechanics to overcome your enemies.

If you are a fan if XCOM I’m sure you will enjoy this. And we believe that this is the killer app for the Nintendo Switch, cannot recommend it enough.

Season pass is available at $19.99, or your region equivalent, which will be split into 3 DLC parts. The first is available now, the 2nd part is available in autumn 2017 and the 3rd and final DLC will be released in 2018 (Date to be announced).

Please check out our Social Media:

We are Sophie & Nick, A happily engaged couple and have been together for over 2 years💍 We both collect pop vinyls, love watching films and playing video games - pc, xbox, playstation, nintendo🎮  We thought we would share our love of geeky stuff with you all 💖  Sophie mainly runs this blog so not only is it about gaming but also lifestyle, mental health and beauty! I hope you enjoy our blog and make sure to follow our social media links!! View more posts